On the 25th March a lecture was held by OASI Foundation, entitled ‘Co- morbidity: Mental illness and Addiction’. Psychiatrists Dr Chantelle Azzopardi and Dr Joseph Fenech gave further insight during this event, on a variety of mental illnesses together with their relationship with addiction and vice versa. The lecture was well-attended with participants all hailing from different professions mostly related to health care.

Dr. Fenech expressed that major depressive disorder is one of the most common mood disorders out there. Major depressive disorder does not usually know its origins from one specific thing, but rather has causes attributed to varies aspects. Dr Fenech highlighted that depression is not a mere feeling of sadness one might experience as we go through life, but is most often a debilitating disorder. Most often, there is a two-way relationship when it comes to substance use and depression. This is due to the fact that several people make use of substances to deal with the symptoms of depression. Although this might seem as a ‘quick fix’ for their problem, it has the potential of exacerbating their illness, most often, this substance being alcohol. Similarly, to major depressive disorder, people also at times make use of substances as a way to self-medicate during the depressive state. Bi-polar however includes a state of mania or hypomania where the person does not constantly feel down and helpless, but rather experiences of state of increased energy, beliefs of grandiosity, fast and incoherent speech and reckless behaviour. This same reckless behaviour is why most often people then make use of substances. Dr Fenech remarked that comorbidity tends to complicate both mood and anxiety disorders and addiction, therefore it is important for addiction rehabilitation centres and mental health services to work together to improve the chances of success. 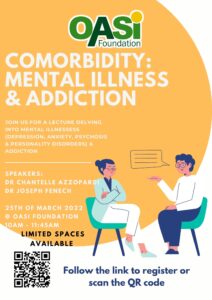 Both Dr Fenech and Dr Azzopardi evoked that causation and treatment of disorders is to take place holistically, keeping in mind, biological, psychological and social factors, based on the biopsychosocial model. For instance, during assessment, any medical issues which might be affected the person are looked into. Once these are omitted, therapy can start including the use of medication if these are needed. It was mentioned that medications do not start helping the patient from day one, but would usually need around four to six weeks to take effect.

With addiction, the aspect of self-medication is usually more prominent as people might use alcohol, opiates, benzodiazepines and cannabis as a way of taking the edge of the extremely distressing anxiety. The substances used will very often greatly worsen the disorder.

Dr. Azzopardi remarked that diagnosis in psychiatry is crucial for several reasons, including to help the patient understand their condition better. At the same time diagnosis, can unfortunately, even in this day and age, bring with it a certain sense of stigma or shame. Statistics show that when working with addicts, there will most often be a diagnosis of mental illness. Psychosis, which includes delusions and hallucinations which most often affect memory and ability to function can be drug-induced. This does not take place only when someone is using substances actively but also at times during withdrawals.

Treatment requires several building blocks including being respectful, setting healthy boundaries, building trust and giving time to mention a few, when dealing with dual diagnosis patients. Being direct and empowering also helps the patient to look at treatment more positively as opposed to feeling ashamed or stigmatised due to their conditions.

The OASI Foundation would like to thank all speakers and participants for their participation and contribution.