Denial is the greatest enemy of the truth;

It puts you in a bubble and cuts you off completely from reality;

Makes you extremely sensitive to the least important thing;

Whilst continuing to seek attention endlessly!

I lived my life with very low esteem. I was bullied, cut myself to physically relieve myself from anxiety, negative emotions, self-hate, loneliness and confusion of doubts.

I got lost in a world where I felt like no one wanted me not even my own family and I ended up alone finding refuge in poetry with the hope that someday someone would see them and understand me. In the state of fear, betrayal and abandonment I was in, I made bad decisions and found myself into bad relationships, where I made myself liked by others in the hope of bringing them into my own distorted reality. What was perfect in my eyes at that time, today is completely different! My body was the resemblance of beauty. Today it’s just an anorexic illusion; a destructive state of mind in which, no matter how thin I am, I am never thin enough and will continue to shrink until finally I break and disappear.

Someone once told me: “smile and the world will smile back to you” My reaction back then was No way!  But today, I think otherwise. Yes, it true! The world would react according to how you act!

I got married at the age of 19, with the impression that I finally found someone who would love me unconditionally. In the rush to get out of my loneliness, I thought I married the man who would solve all my problems back then. But it was too late when I realized that the person I married did not have the security I needed. In the rush to escape my difficult past, I married a man who was still struggling with himself to get rid of his own problems. Nor was I aware that, as a young and immature girl in the body of an adult woman, urging for love and attention, I chose as my husband a man who was nothing but the mirror of my own childhood problems.

Obviously, my marriage didn't work out! The shortcomings and indifference of my spouse to what I was going through affected me so much that I ended up seeking attention elsewhere. My life had become a locomotive, a crazy run from one adventure to another, sometimes feeling good other times feeling down. I took strange decisions and wrong choices in the group of people I used to mingle with.  At first, I felt good, because this time I got the attention I so much wanted. During the same time of this relationship, I remained with my husband faking my marriage for months until I got pregnant by my husband. I decided to end the extra marital relationship but things turned bad because my partner did not accept me breaking up with him. He became obsessed and started following me everywhere I went, blackmailing me with photos and threatening to expose my secret to my husband. One day, out of the blues he lost his mind, became violent and raped me. Thankfully I escaped from his grip and ran home, agitated and in fear.

This dramatic experience has sparked flashbacks from my past. Suddenly, the poems I was writing seemed to make sense and I started to ask myself…. why!? Why now!? I couldn’t understand what was going on, except that something kicked in me. My mind started to see things from a different perspective. I stopped paying attention to what people thought of me. I started to feel like a stranger in my own home. I was frustrated and started to hurt myself physically and cut myself to ease the tension and get rid of the stress that I had. My relationship at home got worse and my husband gave up on me and left. It was then that something clicked the thought of leaving my home and my husband for good. Yet I remained and my husband returned home.

In the meantime, my daughter was born and that’s when I went through a positive period in my life. My daughter was the best thing I ever had and she gave me hope to seek a better future. I had a lot of time to reflect on my past and the current situation I was in. I realized what a big mistake I did when I rushed into marriage…whom I married and how young I was for such a commitment. It was then when I started to feel down again and relapsing into the negative emotions I had forgotten for a while. My relationship had a turn to the worst and after a heated argument I decided that this time I will leave home for sure. I started another extra marital relationship behind my husband’s back, this time with a man who seemed timid and kind. A gentleman who also helped me financially. I thought that this time I found someone reliable, especially since he recommended that I go and seek some sort of guidance before leaving my home and my husband for good. And that is what I did.

I went to a therapist with the thought that everything will be ok once I vented out all the anger I had inside due to the problematic marriage I was experiencing, including the hate I had towards my husband. But the therapist didn’t take long to realize that any matrimonial advice given was not going to be of any help. He realized that my issues were deeper than the actual marital problems I was putting the blame on.  These profound issues needed better attention than any other therapy advice.

The sessions were of great help and helped me stop resorting to self-harm. This saved me from losing custody of my daughter. In the meantime, my therapist helped me empower my self-esteem and became confident and strong enough to have the courage to eventually leave my husband and my home without taking anything I owned, except for my daughter.

My new partner accepted me and my daughter with open arms. My therapist recommended not to stop the therapy sessions and therefore I continued as suggested. By time I realized how judgmental I used to be and how I always rushed into decisions without evaluating the repercussions. It transpired that my new partner, whom I always saw as a quiet, timid person, also suffered from a form of compulsive disorder. He was obsessed with cleanliness, keeping everything in an orderly manner, punctual and abides strictly according to plan. Eventually, he started insulting me since I was nothing to what he was like. Slowly slowly I felt retracting back to my troubled adolescent years. I was once again being bullied and felt like I had lost everything I had built lately. I even tried to attempt suicide on various occasions. Obviously by time, my new partner left me and once again I felt abandoned. Without knowing, I was back into my anorexia disorder and I am very lucky that I am alive!

The only support I had left was that of my therapist on whom I relied heavily. He patiently worked on the anger and bitterness I had towards my mother and all the partners I had encountered. One day, I started to have this weird, turbulent dream, with a 5 or 6-year-old girl playing with friends - all having clouded faces. I could even hear my mother panicking and screaming in the background "Where is my daughter?". I remember cutting short my dream and waking up scared, and going back to sleep and dreaming again and seeing this girl hiding again. Other times I dreamed of my mother staring at me and angrily asking me "What did you do? What did you do?" while I was terrified because I couldn’t understand and remember what I had done wrong.

It was during one of the sessions with my therapist when I came to my senses. Encouraged by my therapist to recount my dream, I began to remember clearly this girl and the other children when suddenly, as though a veil had fallen from their faces, I began to recognize them. They were two much older children whom I, being such an innocent girl, trusted blindly. I immediately remembered them betraying me while we were having fun playing in my grandmother’s back room.

The confusion and panic that ensued between my mother and grandmother unfortunately shocked me and frightened me a lot. I lost all confidence in myself and for many years I entered into a turbulent sense of guilt and rebellion. The panic that arose after the abuse was so great that I suddenly lost my innocence over something I did but didn’t actually know what it was. So as not to feel the emotional pain, my mind just pushed this ugly experience in me into my subconscious. That is the reason why I couldn’t remember the incident. I was so irritated and uncomfortable with my mother's presence that as a result I made her life a living hell and, in the process, I unknowingly hurt myself a lot.

After that extraordinary therapeutic session, I spoke to my mother about what had happened to me. She did not deny the story, on the contrary, I felt that she understood me a lot and we grew closer and since then she has become my best friend. As a mother myself, I could understand that she too was young and inexperienced and because of that she had made her own bad choices in life. However, I still believe that it is ultimately the parents’ responsibility not to leave their children out of their sight.

I continued with my therapy session that helped me throughout my recovery while being constantly in the life of my daughter whom I love with all my heart. Looking back, I feel lucky to have managed to put all my past trauma behind me. I waited patiently for the right man to come along without having to rush myself searching for him.

Today I am very happy in another stable relationship with the man I love and the father of my second daughter. Yes, there will be moments when life will be difficult and where we will feel weak, but my partner of today understands me, supports me and helps me win over these moments with his great love and genuine stability. And when life gets tough, I look at my daughters and realize how lucky I am to have them and therefore I have to be strong for them as well and do my best to come out of any tough situations I may come across occasionally. 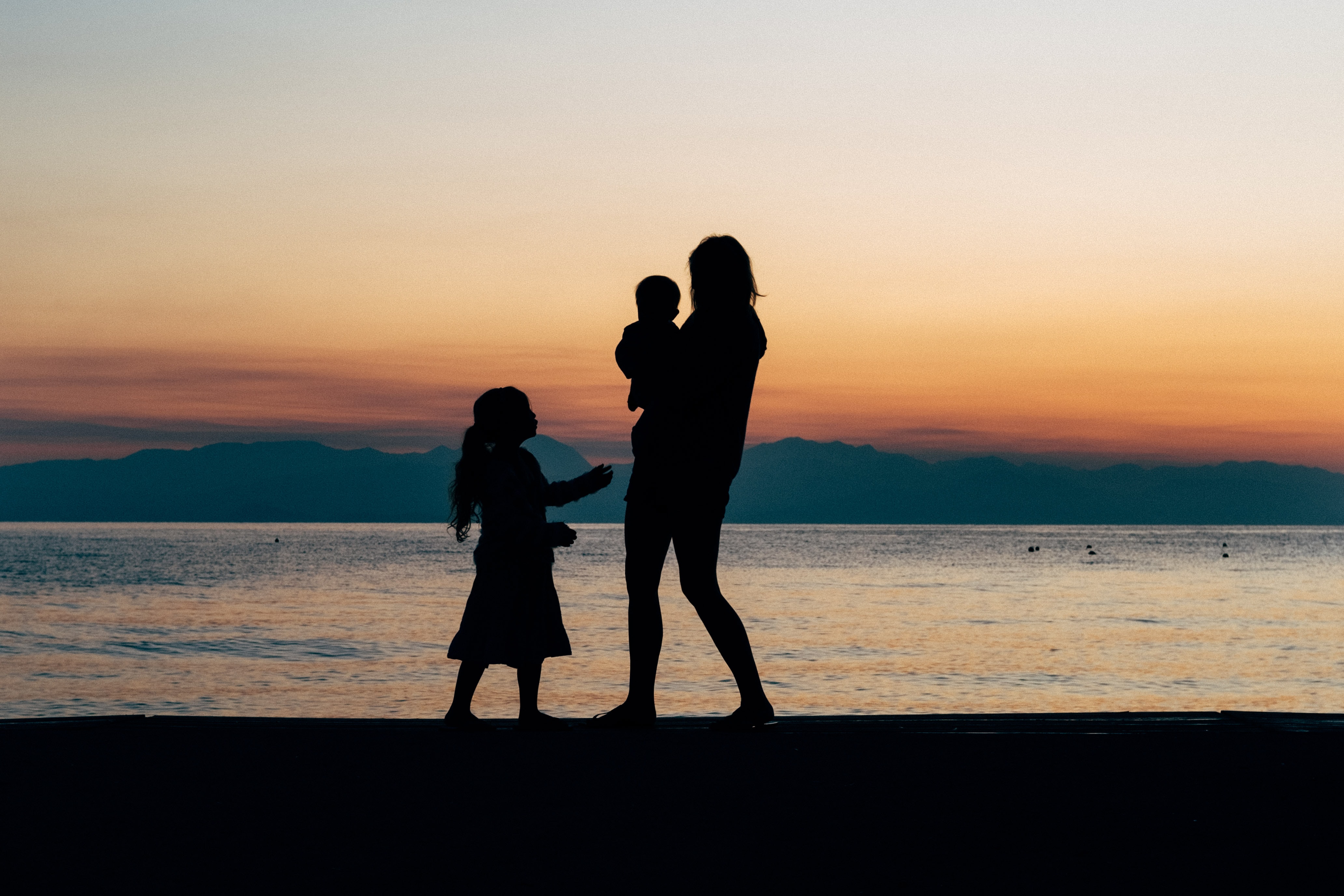